Exactly 145 years ago today, on July 1, 1876, the Yuma Territorial Prison welcomed its first prisoner, William Ball of Tucson. He had been sentenced to life for second-degree murder.

In honor of the anniversary, the state park now hopes to welcome 145 visitors and raise at least $145 in donations on this day. Funds are needed to restore the sally port at the historic prison, which is made of adobe and has sustained water damage. To donate online, go to www.yumaheritage.com/donate.html or www.yumaprison.org. 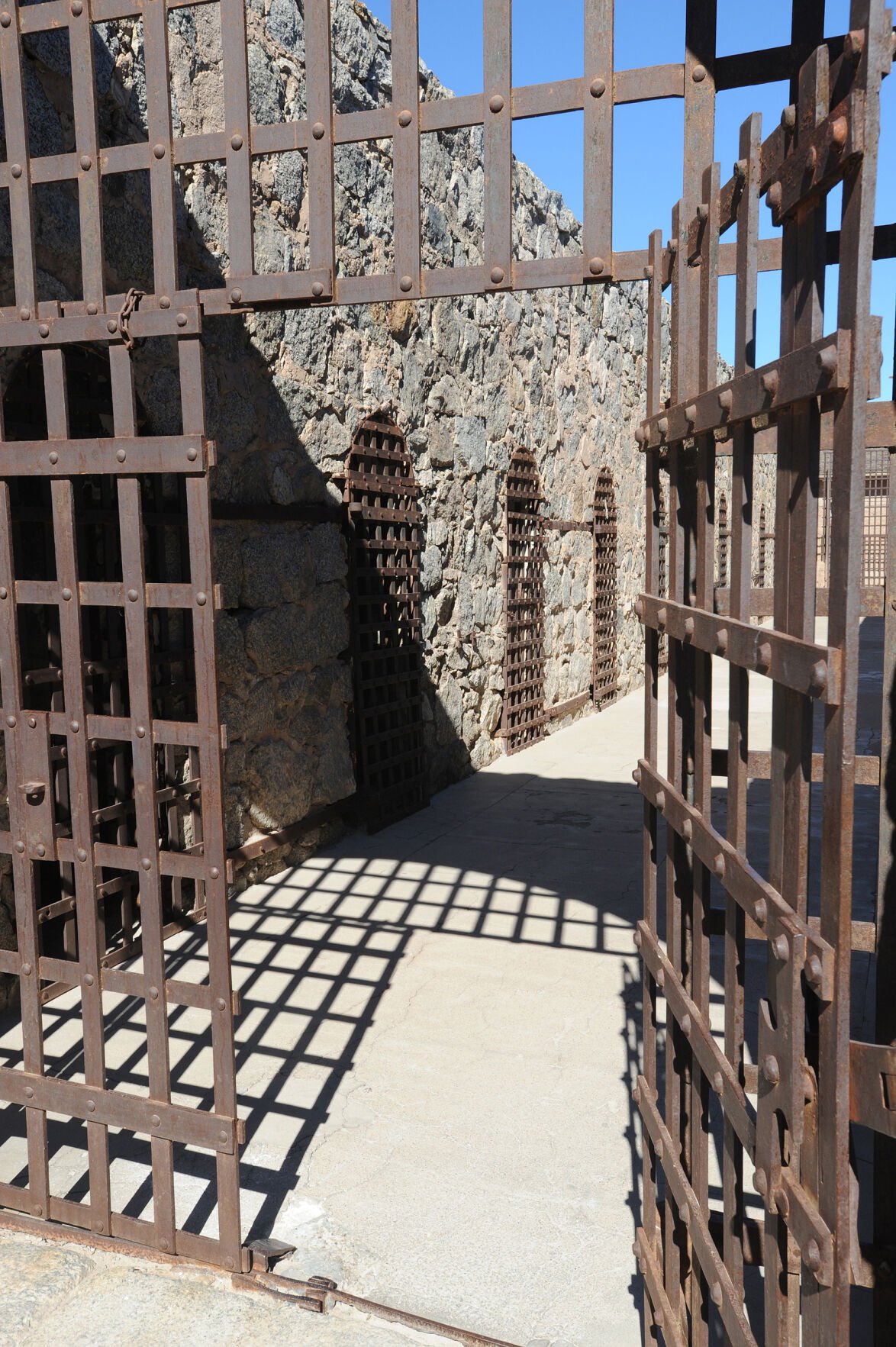 An iron gate swings open to a row of cells at historic Yuma Territorial Prison. 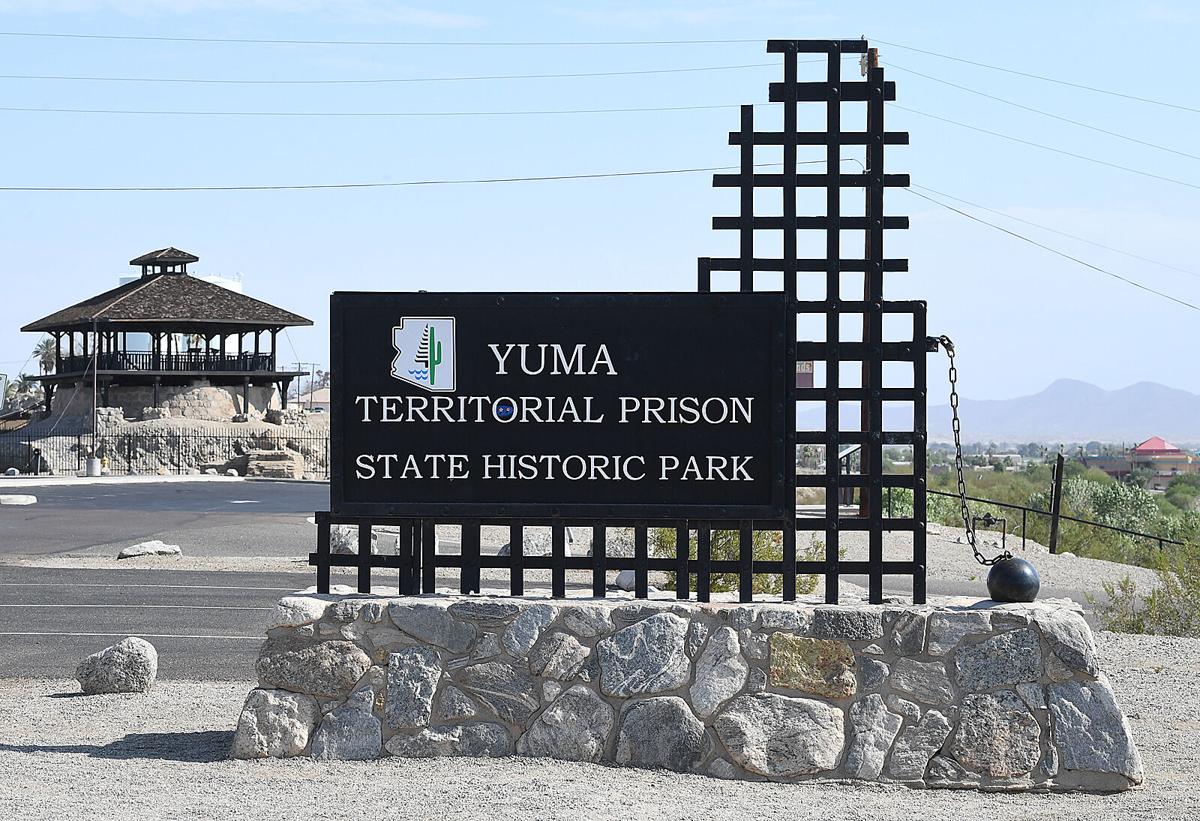 A sign that incorporates the prison cell steel bars and a ball and chain greets visitors to Yuma Territorial Prison State Historic Park. 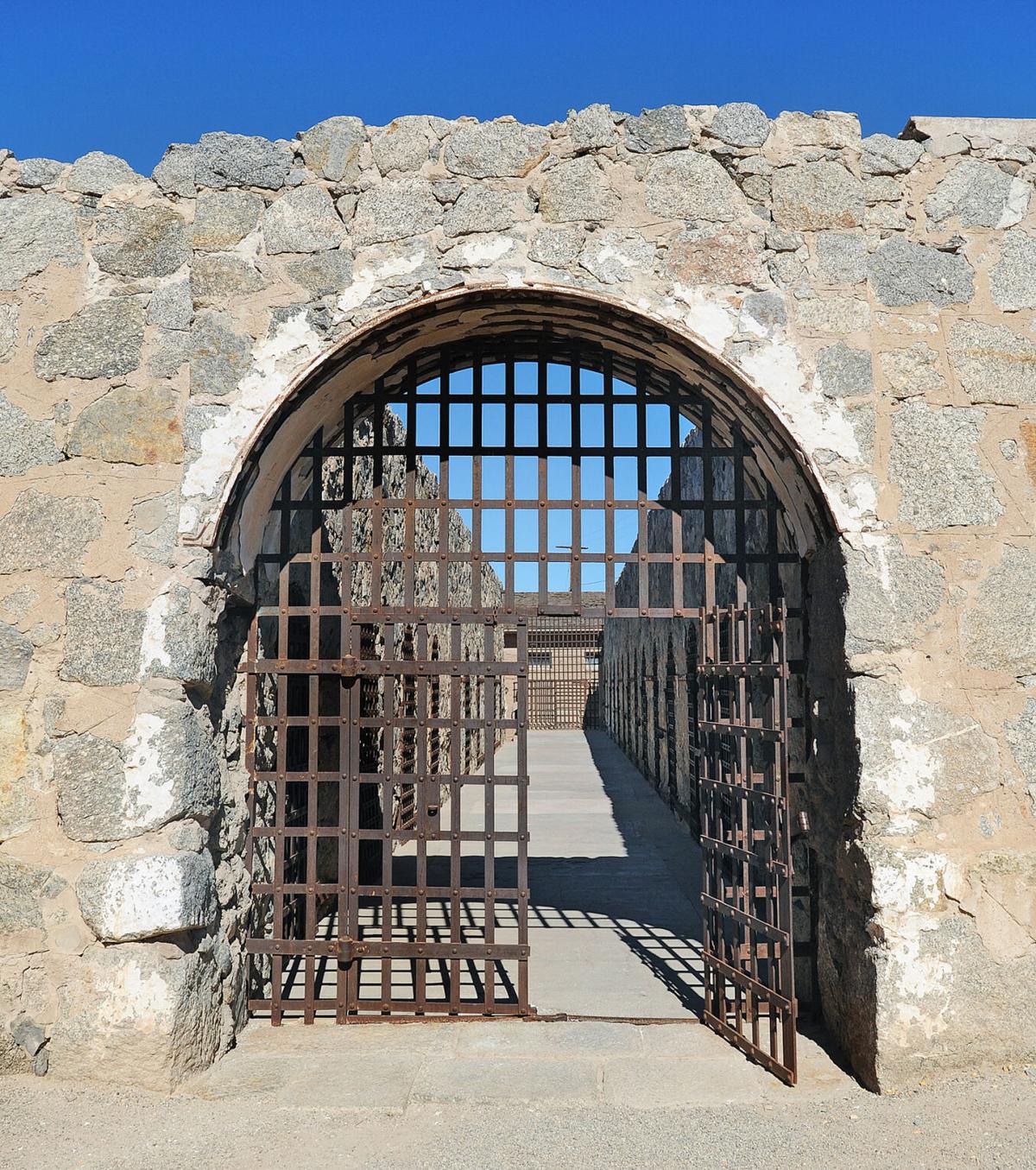 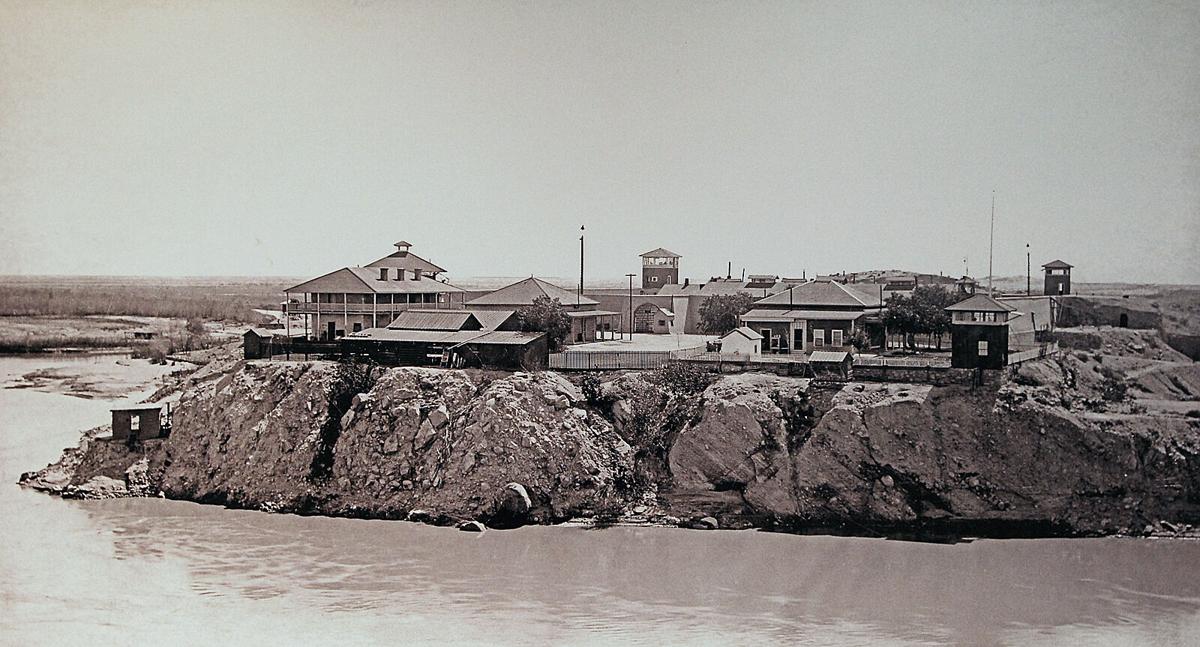 A photo inside the Yuma Territorial Prison State Historic Park museum shows the historic penitentiary long before the construction of the Southern Pacific Railroad bridge, or the Ocean to Ocean Highway bridge.

Yuma Territorial Prison cells are visible to motorists and pedestrians passing by on Penitentiary Avenue. The construction of the Southern Pacific Railroad Bridge in 1923 led to the demolition of the prison’s west wall and the women’s cells, leaving these cells exposed. 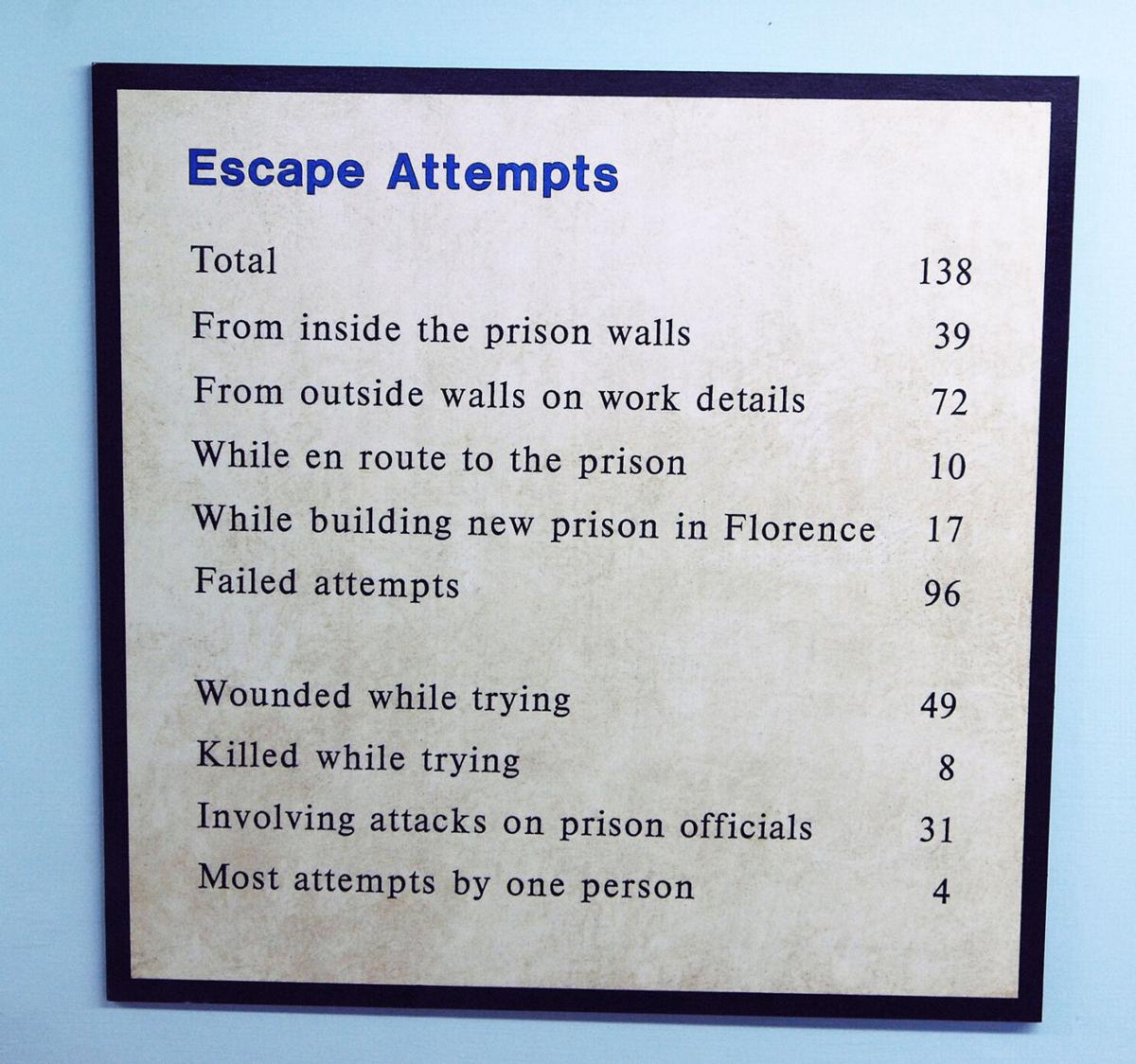 Yuma Territorial Prison by the numbers. 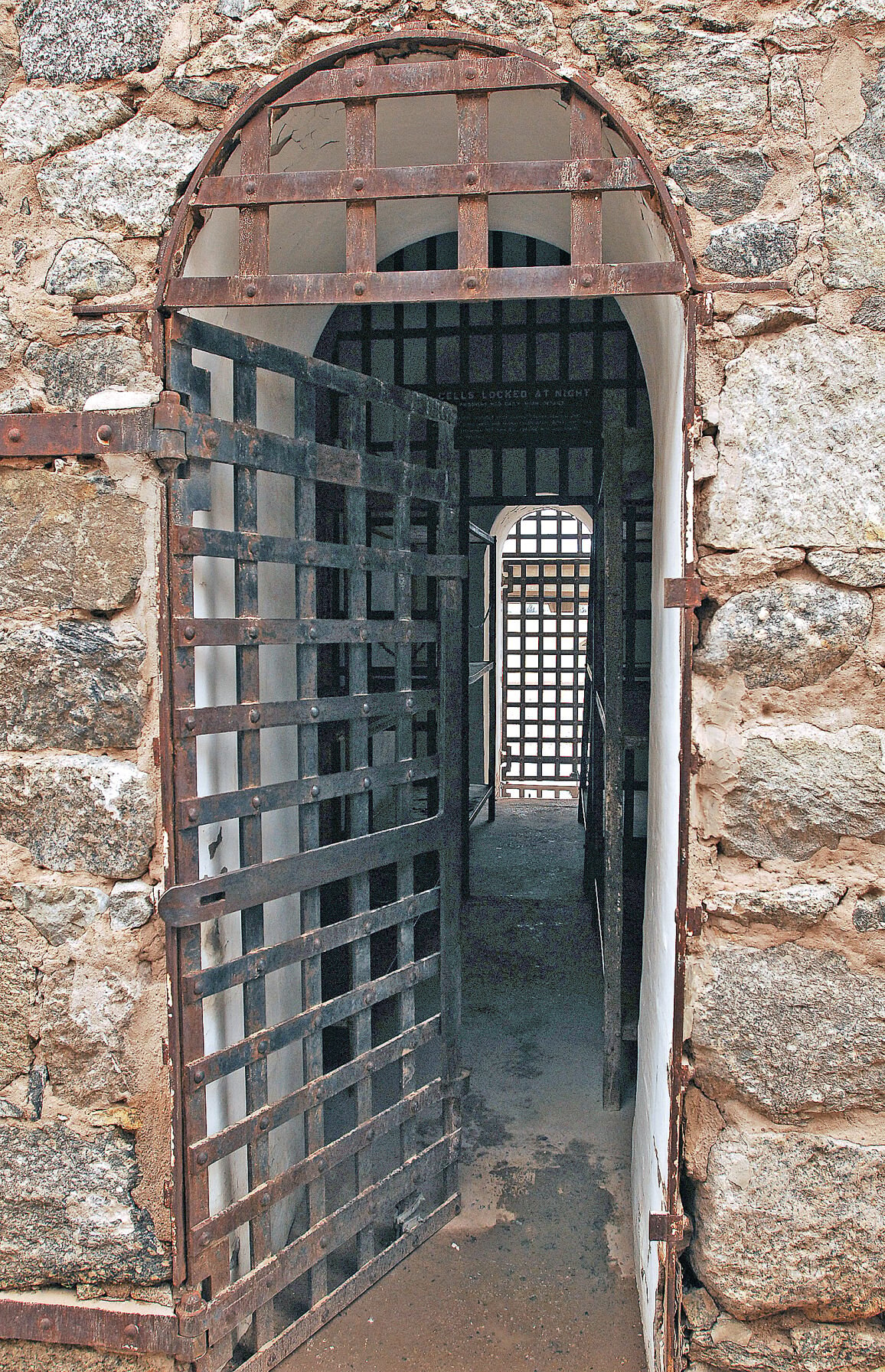 Visitors to Yuma Territorial Prison can still walk inside some of its historic cells. 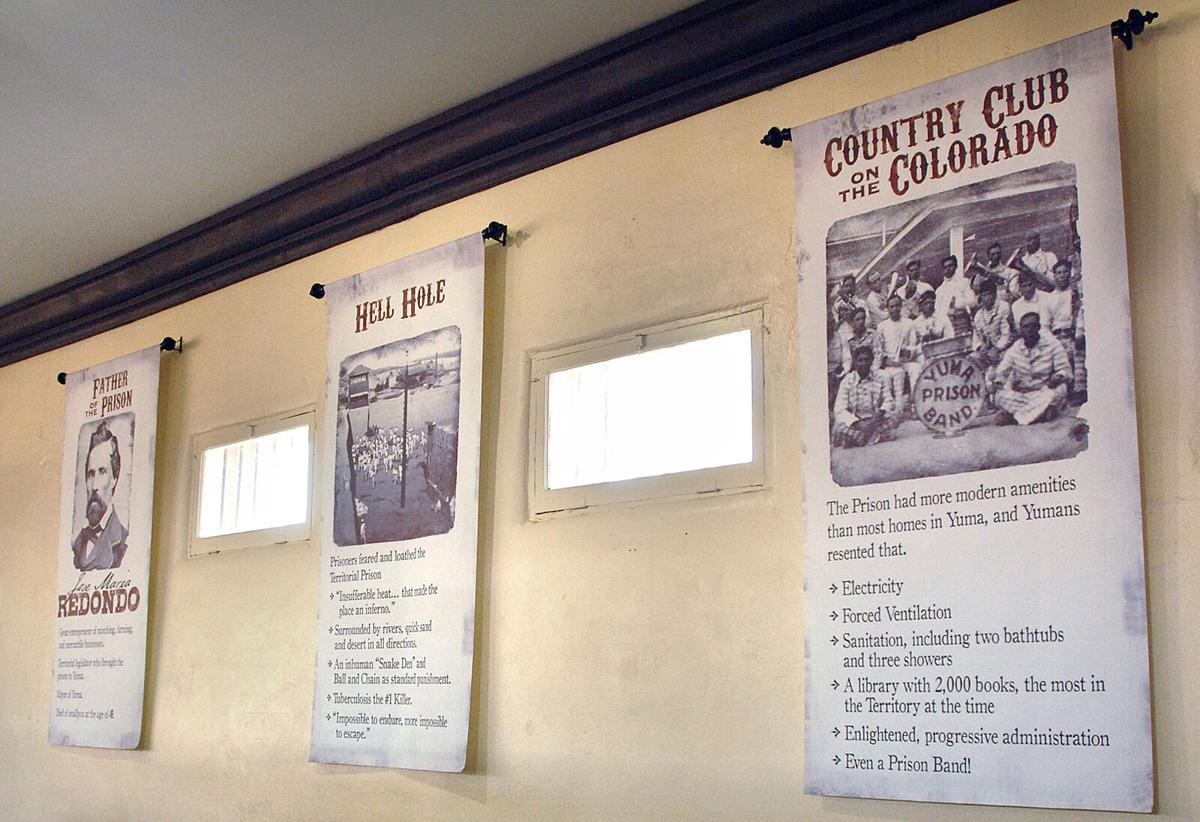 One of the popular attractions inside the Yuma Territorial Prison is a collection of large poster-like banners, each with information about the historic facility.

Exactly 145 years ago today, on July 1, 1876, the Yuma Territorial Prison welcomed its first prisoner, William Ball of Tucson. He had been sentenced to life for second-degree murder.

In honor of the anniversary, the state park now hopes to welcome 145 visitors and raise at least $145 in donations on this day. Funds are needed to restore the sally port at the historic prison, which is made of adobe and has sustained water damage. To donate online, go to www.yumaheritage.com/donate.html or www.yumaprison.org.

However, Ball and another six convicts from across Arizona didn’t just walk in through the sally port into their respective cells. They first had to build their own cells. And the sally port wasn’t built until 1885. 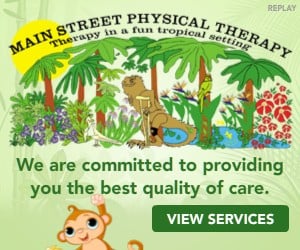 The convicts constructed the cells with rock. During the day, they toiled under the heat of the sun and at night they were locked up at the Yuma County Jail on Main Street.

No one knows what Ball or the early prisoners looked like. No mugshots were taken of the first 235 prisoners.

There is some information on Ball. He was released upon pardon by Acting Gov. H.W. Van Armand on July 24, 1884, but he returned twice more as Prisoner No. 414 and 581 for grand larceny.

The repeat offender was a “criminal’s criminal,” Clark noted.

Prisoner No. 2 was Daniel Cannon of Yavapai County, sentenced to 31 years for second-degree murder and pardoned by Gov. John C. Fremont on March 29, 1881.

Nickolas Peralto, convicted of attempted robbery, was Prisoner No. 3. Although he helped build the cells, he was pardoned before he could move into a cell.

Prisoner No. 4 was Guadelupe (sic) Baldeviro, sentenced to two years for forgery and pardoned on March 13, 1877.

Lewis Bachman of Maricopa County became Prisoner No. 5. He was sentenced to two years for embezzlement and pardoned by Gov. Anson P.K. Safford on Jan. 4, 1877.

Prisoner No. 6 was George Bundy of Yavapai County. He was sentenced to three years for perjury and discharged on April 13, 1879. He returned as Prisoner No. 431.

Prisoner No. 7 was Yavapai County’s John Hoover, sentenced to five years for grand larceny. He was pardoned by Gov. Fremont on Nov. 10, 1879.

John Ryan, Prisoner No. 8, was sentenced to five years for robbery. Gov. J.J. Gosper pardoned him on Jan. 1, 1881. With Peralto being pardoned, Ryan became the seventh inmate to move into the prison.

The cells built by the first prisoners are still there. While the roof line over the other cells is straight, the roof of the first cells follows the shape of the rocks.

The prisoners weren’t skilled carpenters nor did they have construction experience. The architect overseeing the project told them how to do it.

Although the prisoners were ordered to construct their own cells in the middle of summer, no one protested. It was seen as part of the punishment for breaking the law. The prisoners, including murderers, weren’t seen with a lot of respect. They were considered free labor, Clark explained.

Yuma was home to people used to a tough life in the desert, the historian added. The photos and history of some of these prisoners are on display at the museum.

Even after the prison started taking photographs of the inmates, only 50 of the first 700 mugshots still survive. No one in those early days imagined that the prison would become a major attraction, drawing more than 60,000 visitors a year. The museum now has thousands of prisoner documents, mugshots and rap sheets from its 33-year history.

The Legislature authorized the territorial prison in 1875 and budgeted $25,000 for the project. The ground-breaking took place on April 28, 1876.

The lawless conditions in Arizona at the time had convinced legislators that a prison was needed. Members of the Territorial Legislature, including Yuma Mayor Jose Maria Redondo, decided Arizona needed three things: a capital, a university and a prison. The capital went to Prescott, the University of Arizona went to Tucson, and the prison went to Phoenix.

But, Clark explained, Redondo had “other ideas. When the legislators went to lunch, he crossed out Phoenix for the prison and put Yuma in its place. Redondo knew a prison would be a “great financial boon” to Yuma.

“He was right. Yuma did very well with the prison economy,” Clark said.

Consequently, Redondo became known as “Father of the Prison.”

While the convicts themselves might not have enjoyed their time in the prison, Yumans dubbed it the “country club” because it had more amenities, considered modern at the time, than most homes in Yuma, and residents resented it.

Some of the amenities, according to the park’s website, included electricity; forced ventilation; sanitation, including two bathtubs and three showers; a library with 2,000 books, the most in the territory at the time; and even a prison band.

Due to overcrowding, after 33 years, all inmates were moved to a new prison in Florence. After Yuma High School burned down, students used the facility from 1910 until 1914, garnering them the nickname of “The Criminals.”

The County Hospital used the facilities from 1914 until 1923. The following year, Southern Pacific Railroad demolished part of Prison Hill to make way for the new tracks. In the 1920s and 1930s, hobos riding the trains stayed in the cells, while homeless families moved in during the Great Depression.

From 1931 to 1960, the Veterans of Foreign Wars used part of the facilities as a clubhouse.

Interest in preserving the prison started in the early 1930s, and in 1939 residents began to raise funds for renovation of the guard tower and construction of a museum.

The City of Yuma operated the museum until 1960, and in 1961 it became the third state park in Arizona. The Yuma Crossing National Heritage Park took over management in 2010, although it still remains a state park.

With the majority of visitors coming to the park during the winter, summer is a good time to leisurely peruse the exhibits and cells. The park, located at 220 N. Prison Hill Road, is open from 9 a.m. to 5 p.m. Thursday through Monday. The park is closed Tuesday and Wednesday. 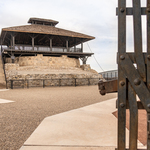