The legend says that many years ago a little girl in a red dress trying to retrieve her doll from the Colorado River drowned. She now haunts the Yuma Territorial Historic Prison, and if she doesn’t like a visitor or if a person is wearing red, the little girl will pinch the visitor.

Stories like this one have long given the state historic park a reputation as one of the most “haunted” places in the United States. Now it’s official: USA Today readers have voted the historic prison as the “Best Haunted Destination” in the nation.

The Yuma prison faced stiff competition, going up against destinations with sinister-sounding names such as the Trans-Allegheny Lunatic Asylum in Weston, West Virginia, the Villisca Axe Murder House in Villisca, Iowa, and the Queen Mary, which is docked in Long Beach, California, and has an established reputation as being haunted.

However, the Yuma community rallied to get the local landmark to the top of the list and the campaign succeeded. USA Today announced the Yuma destination as the winner Friday morning.

The publication noted that the prison “has been a hub of paranormal activity. Reports include spirits of inmates on death row, a woman wandering the banks of the nearby Colorado River looking for her drowned daughter and a small child in a red dress who pinches passersby.”

Park manager Mike Guertin pointed out other stories of why “souls became trapped” in the prison. At least one prisoner hanged himself in a cell and a couple of inmates died in a riot in 1887. There were several escape attempts that didn’t go so well, and there’s an old cemetery down the hill from the prison.

It’s no surprise that some visitors have sworn that an angry voice had told them to “get out.” Many paranormal reports come from the “dark cell,” which was used to punish inmates who broke the rules. As the name implies, the dark cell is pitch black. Inmates would be stripped down to their underwear and chained where they stood. Guards would throw in scorpions, joking that the glow of the creepy crawlies would provide the inmates with a little light.

Of the contest, Lowell Perry Jr., executive director of the Yuma Crossing Historical State Park, which oversees the prison complex, said, “It was a lot of fun. We had fun with it.”

Perry expressed appreciation to the Yuma supporters who voted in the contest, but he also noted that the prison received support from across the world, including Germany and Canada, many of whom had visited the prison.

Perry also thanked Sarah Halligan, YCNHA communications and marketing specialist, for doing a good job of getting the word out and reminding people to vote.

He also gave credit to Guertin and his team for doing “such a fabulous job every day and making sure the grounds are clean.”

From 1876 to 1909, the prison housed 3,069 men and women convicted of crimes in the Arizona Territory. The “Wild West” conditions in Arizona at the time convinced legislators that a prison was needed. It was after the Civil War and the nation was experiencing a westward migration. Some of these people needed to flee their home states but left behind their law-abiding ways.

The first inmates entered the prison on July 1, 1876, and started constructing their own cells with rock. 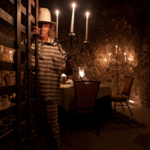