In the first month of a fundraising campaign, Yumans have shown that they are invested in their local landmarks.
Last month, Yuma Crossing National Heritage Area kicked off its Giving Tuesday campaign “Be Yuma’s Future by Investing in its Past” with the goal of raising money to restore iconic Yuma landmarks, including the historic Territorial Prison, Colorado River State Historic Park and the East Wetlands.
The goal for the first month was $20,000 with a “long game” target of $100,000. Thanks to donors, the campaign surpassed the first goal and reached the $23,000 mark.

Spearheading the campaign, YCNHA staff members Sarah Halligan and Lisa Dickson thanked the individuals and organizations who gave during the initial campaign. Among the donors were Shay Oil, John and Pam Osterman, AEA Federal Credit Union, Harrison Farms, Louis and Geri Didier, Kevin and Michelle Stoleson, Matt Molenar and others who have asked to remain anonymous.
The organization is not waiting to raise $100,000 before they start working on the landmarks. “We want them to know their money will be put to work,” Halligan said, noting that donors can choose which landmark to support. The wetlands have received enough support to start small projects in that location.
But there’s still a ways to go. “This was the first step,” said Lowell Perry Jr., YCNHA executive director. “Now we’re shifting and we’re playing the long game.”
To accomplish the “grand vision,” as Perry noted, the agency will need to hit every available source, including public and private grants. YCNHA receives support from the National Parks Service, city and state, but the agency also wants to apply for large federal grants that require matching funds.
The agency set the goal at $100,000 to be proactive. It wants to make sure it has enough for matching funds.
Perry is confident that Yumans will support the campaign, pointing out that the community has a history of coming together. When the Colorado River park and Territorial Prison were “threatened with extinction, citizens of this community came together to make sure that didn’t happen,” he said.
Most of the assets under the oversight of YCNHA are old and require more than touch-ups. When YCNHA announced the campaign in front of the Old City Hall, located at 181 W. 1st St., Perry pointed to the year stamped above the entrance: 1920. The historic building is 100 years old and urgently needs repairs.
The sally port at the historic prison and the corral house at the river park, formerly known as the Quartermaster Depot, are made of adobe that has been degraded by water.
WHAT’S NEXT
“This is just a kickoff for a new future beginning. Our needs are gigantic,” Dickson said, noting that the only way to accomplish the needed restoration is by keeping the community involved.
They’re hoping community members and organizations will feel invested in the region’s history and will want to donate.
In the meantime, the agency will continue to seek funds through the usual channels. Arizona State Parks and Trails is committed to investing both in the river and prison parks as far as restoration.
YCNHA is also working with state legislators and the Governor’s Office with the hope that they will set aside restoration funds. Perry noted that the Yuma delegation of legislators, including Rep. Tim Dunn, recognize the value of the landmarks as far as attracting visitors and businesses and understand the need for legislative action.

We have a compelling case. We’re not just saying write us a check. We’ve shown willingness, and the city of Yuma continues to invest,” he added.
The Territorial Prison is Yuma’s most visited site and one of the most visited in the state. When visitors have one day in Yuma, they almost always choose to tour the prison.
“We’re just scratching the surface. We can be so much more and become more of a destination,” Perry said.
After restoration, YCNHA wants to enhance the visitor experience, in particular with visuals and audio to attract young people. The river park has also been trying to become more multicultural and include displays that highlight the role of the local tribes and Hispanic and African-American populations.
“Our vision for Yuma is to highlight the history of Yuma. We’re story protectors, not just telling stories but protecting the history,” Perry said.
Halligan noted that the agency is accepting more than just monetary donations. Some community members have already contributed with time, contacts, ideas and even historical artifacts.
To those who have already donated, Perry said, “On behalf of the Heritage Area staff and board here, a heartfelt thank you for participating this far.” To the entire community, he invited them to “invest their time, talent and treasure.”
“We look forward to doing great things for the city together,” Perry added.
To donate, go to https://www.yumaheritage.com/index.html. To learn more, call Halligan or Dickson at 928-373-5198. 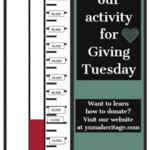