One of Yuma’s most cherished and historic landmarks is being recognized for an eerie reason.

Yuma Territorial Prison Complex has been nominated among the 20 best “haunted” destinations by USA Today’s travel site 10Best as part of their reader’s choice awards, and over the next 19 days, people can vote to determine its place among the creepiest locales in the country.

The webpage where votes are cast describes the prison as a “hub of paranormal activity,” and describes some of the ghost stories associated with the location.

To cast a vote cementing Yuma Territorial Prison’s reputation as one of the spookiest destinations in the country, visit bit.ly/2YQAuDP

“Reports include spirits of inmates on death row, a woman wandering the banks of the nearby Colorado River looking for her drowned daughter and a small child in a red dress who pinches passers-by,” the page reads.

This isn’t the first time that the territorial prison has been recognized for being a “haunted” location, too. In 2016, the Travel Channel show Ghost Adventures released an episode titled “Hell Hole Prison” where they investigated paranormal activity in the cells and halls of the Yuma Territorial Prison Complex.

Sarah Halligan, communications and marketing specialist for the Yuma Crossing National Heritage Area, said that this brought a lot of people out to the prison who were looking to experience the more creepy side of the American southwest.

“Some tapings have really put us on the map to be a place, you know, that is haunted,” she said. “And then also because of the history that ties into it with the prisoners.

“One hung himself, a couple have died in the riot (in 1887) and stuff like that to where there would be some lingering spirits there.”

She also said that the prison cemetery, located “right outside of the prison doors,” lends to the idea that there could be paranormal activity in the area.

Though, what gives Halligan the chills is stepping behind the old-fashioned iron doors and into one of the prison’s many cells.

“I really don’t get that feeling until I’ve stepped into the dark cell, or stepping into some of the cells,” she said. “You know, they were dark and they were built by the prisoners themselves. You just get a sense of so much history and you know that it wasn’t always a happy place.

Though it may still give visitors a grim impression, since its time as the main repository for outlaws in the surrounding area during the late 19th and early 20th centuries, the prison has played home to much more than just criminals.

In the 1910s, Yuma High School used the building, and during The Great Depression, it served as a refuge for homeless families that were down on their luck. 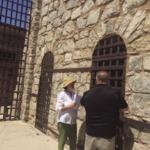